Ever wanted to learn programming from scratch? Here are seven fundamental tips to help you get started! 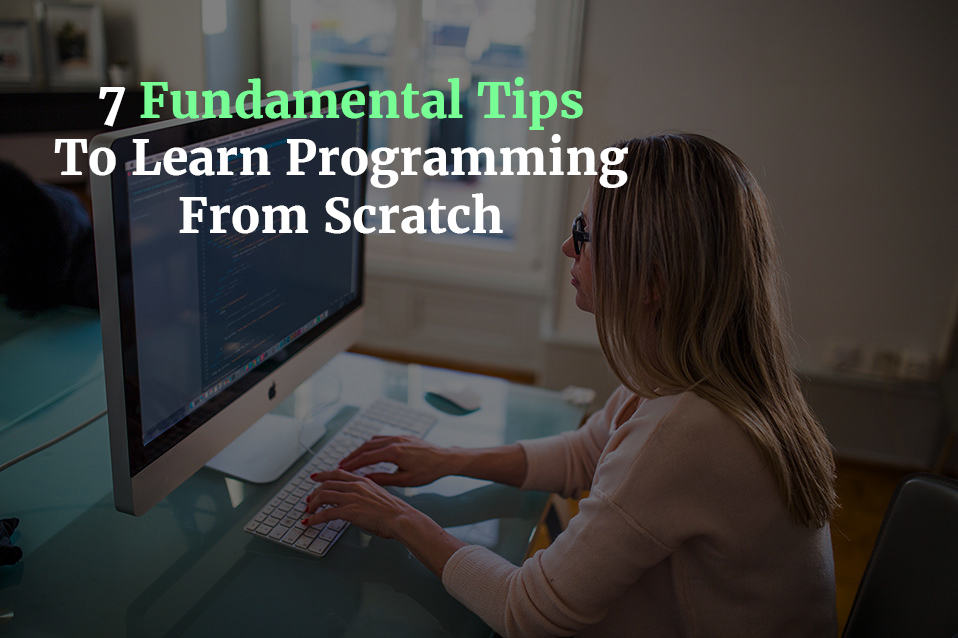 As an increasing amount of employers and companies are acknowledging the need for workers who have technical skills (especially in a day and age where everything is going digital), more and more people are getting inspired to start learning programming.However, one common concern from any and all aspiring programmers is whether or not it’s possible for a person to pick up a technical skill like coding from scratch.

Well, naturally not everyone is a potential Bill Gates in the making. However, one has to admit that nobody - not even Steve Jobs or Mark Zuckerberg - was born knowing how to code.As with any other skill, a person has to study and learn programming from the ground up, and they would need to put in the time and effort (and money, if necessary) that is required for them to learn. With that being said, while of course it’s possible for someone to learn programming or coding from scratch… it doesn’t mean that it will be easy.But then, few things that are worth learning are.

So if you believe that you would like to pick up this important new skill, read on! Here’s how you can get started learning programming from scratch:

1. Know Why You Want To Learn Programming

Different people will have different reasons for wanting to learn how to program. Whether it’s because they want to increase their net worth in today’s job market, or so they can learn a new skill that will enable them to give up their 9 - 5 job and start a potential new freelance career…Whatever the reason, knowing “why” you want to start learning programming will help you to determine the direction you want to take and how much time and energy you’ll be able to devote to your study.

For example, if you just want to learn the basics of programming, then you probably won’t want to invest in an intensive coding bootcamp. You can look up books and online tutorials for that. But if you’re really determined to invest yourself and want to make a career of programming (or just want to use your new skills to improve your current job or start up a new business), then you’ll want to consider joining a good coding course or program.

So build the foundation - know WHY you want to learn programming, and everything else will come after.

2. Pick a Programming Language To Learn

Before you start learning, you’ll want to pick the right programming language to learn. There are lots of different opinions and debates about which is the “best” programming language, but basically what you need to know is that there is no “best” language. Every programming language out there will have its pros and cons. Some are more beginner-friendly than others, but you’ll also want to consider other factors, such as:

Here’s a piece of advice: The good news is that many programming languages are similar, and share a lot of similar concepts with each other. At the end of the day, it may help you just to pick one and learn everything you can about it. Later, when you’re ready to pick up a new programming language, you’ll find your previous knowledge of the first language you learned will help you with learning the new one.

I think natural human instinct has us wanting to speed our way to the finish line as fast as possible.

When it comes to learning programming, the ironic truth is that while everyone believes that it has to take a long time to learn, and yet everyone wants to finish learning it as quickly as possible!

Now, don’t get me wrong. It is possible to learn programming in as little as 8-9 weeks. This guy managed to teach himself programming in 8 weeks, for example. But it’s important to note that even though he did it so fast, he still planned things out and broke his learning into smaller chunks. I completely recommend that you do the same. Start with the basics, and remind yourself to learn at a pace that you’re comfortable with. In fact, if it would help you, I would suggest breaking things down into simple steps that you can follow, or a daily plan. Also, if you find that the learning method that you’re using isn’t working, try to find another way before giving up altogether. There are plenty of resources online, or if book-learning isn’t your thing… Then try and put what you’re learning into practice. Most people find that it’s easier to learn programming by doing rather than reading about it. You can play coding games, or even look up one of those websites which is for teaching kids how to code if that makes things easier to understand.

4. Start At The Beginning

Another thing that people often forget is that it’s really best to start learning programming at the beginning - as with anything else that you may want to learn. That’s because a lot of people often fall into the trap of wanting to jump right in and start creating apps right from the get-go, when what they should be focusing on is learning and understanding the fundamentals first.

Remember, when you’re building a house, you don’t just start throwing on the roof and putting in windows and doors. Instead, you need to first put in the foundation and framework before proceeding with anything else.

So it is when learning programming. The only way for you to gain a truly comprehensive understanding is to start with learning the how and why of programming fundamentals. Otherwise, you may find yourself facing some basic issues further along the line.

One great thing about the coding/programming community - it’s filled with people who are willing to help out. By connecting yourself to the community, you’ll find tons of people who can help teach you… and eventually, once you’re more experienced and knowledgeable, you’ll be able to help and teach others as well. Instill yourself with a willingness to learn from others. In fact, studying the way others program or code can help you to discover new things and think in brand new directions.Just remember to give back to the community as well, and share with others when you learn something new. You’ll be building meaningful relationships which will not just help you learn and grow, but which may benefit you in the future.

I said it at the beginning of this article, and I’ll say it again: Learning programming will most certainly not be easy. If you’re from a non-technical background, especially, you won’t just be learning a whole new language and operating system, you’ll be training yourself to think in a whole new way - which will definitely be tough at first, because you won’t be used to it.

Plus, you’re going to be surrounded by all sorts of noise from family, friends, or people who think they are “experts” as they give you well-meaning advice. You’ll be discouraged, mentally and physically tired, and there’ll be a ton of folks who think they know better than you and everyone else about “best practices” and conventions.Some may even try to advise you off of learning programming outright.You’ll need to steel yourself, block out the negativity, and be prepared to focus on learning and moving forward.

This is perhaps the most important tip of all: Just do it.

Seriously, if you’ve already made the decision that programming is something that you really want to learn, then just go do it. Enroll in a coding school, join a program, or look up resources for online study - whatever it is, get off your butt and get started.

BONUS: Should I learn programming if I don’t want to be a programmer?

If you’re still here and still on the fence about things, then here’s my honest answer to you:

‍Yes. Consider this - some people may have the skill and ability to design awesome graphics, or create awe-inspiring videos, but that doesn’t necessarily mean that they need to work as a designer or videographer. Beyond increasing your knowledge and technical skills, being able to program will add the following skills to your repertoire:

There’s a whole lot more pros than cons when it comes to learning programming, so you’ll want to decide if this is really something you want to do, and if it is ...

Take the first steps and get started today!

Think you got what it takes to learn to program? Join us here at NEXT Academy!