Is Coding For Me? 6 Commonly-Asked Questions About Coding

If you're curious about coding or want to take your first steps into the tech world, we know you might have a lot of questions or feel overwhelmed about the wealth of information and opinions out there. 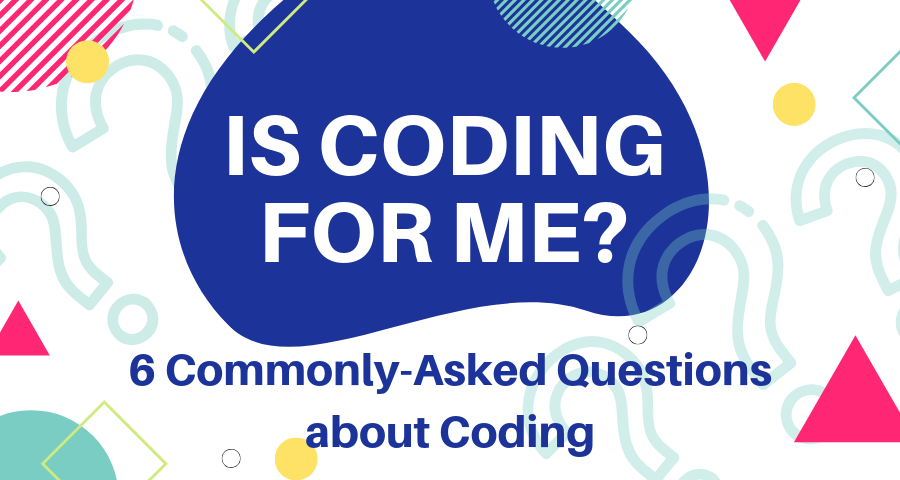 Like learning any new skill, the beginning will always have a high learning curve. It will be a lot of information thrown at you and often times you might feel overwhelmed by how much there is to know and learn.

Imagine going to a new country and now you need to learn a new language... it might be overwhelming and scary at times, but you have to push through and not be afraid to try learning it and, most importantly, using it.

With coding, you are learning to speak the computer's language.

And just like learning a new language, the more you immerse yourself in it and use it, the easier it becomes to understand and the more connections your brain will start to make.

As you build more apps and problem-solve with your peers, you'll develop a stronger mind for coding and how things work in your selected language.

Soon, you'll find yourself picking up new concepts and techniques faster than before, and experimenting with new ways to make things work by yourself.

Many people worry that they're not smart enough to learn how to code, but it's less about smarts and more about discipline and determination to keep going even when things don't make sense.

At NEXT Academy, 80% of students started with very minimal to zero coding knowledge. No one is going to say that coding is easy, but one thing in common that everyone who wants to succeed has is commitment.

No matter how hard something can be, you can overcome it with: commitment + peers to learn together + good mentor guidance.

2. What if I haven't coded before?

If you haven't coded before, there's no better time to start than now!

As mentioned, 80% of NEXT Academy's students have minimal to zero coding knowledge. A lot of them only touched code for the first time at NEXT Academy and many of them became software engineers after that!

Our students come from vastly different backgrounds, both educational and career-wise (e.g. lawyers, school dropouts, mechanic, waiters, designer, DJs etc.), but all with the same ultimate goal: to learn how to code.

We understand that learning something entirely new and starting from scratch can be very intimidating, but don't fret! There's no better way to learn than alongside like-minded people, all of whom will develop their own sense of logical thinking when it comes to coding and problem-solving. Together you'll come up with unique solutions to your problems and learn how to hone your logical thinking.

One of the things NEXT prides itself on is the sense of community and support that each batch of students builds together over the course of 10 weeks.

3. Why a bootcamp and not a Computer Science degree at university or college?

This really depends on you. What are your goals for the future? What area of tech do you want to be in?

A Computer Science (or CS) degree will teach you a breadth of theory and knowledge on topics such as computer systems, the basics of artificial intelligence, algorithms and possibly a language such as Java or C.

Bootcamps, on the other hand, are very focused on the practical aspect of coding i.e. building things like websites and web apps from scratch.

At the beginning of your coding journey at NEXT, for example, you'll learn the fundamentals of building a static web page using HTML, CSS and JavaScript, and the core concepts of coding, such as data structures and functions.

From there, you'll start learning how to build full-on web apps (think something like Instagram, Facebook or AirBnB) in Python, complete with a database to store your users' data.

So ultimately it's up to you and what your goals are.

Or, if you want to strictly learn how to code, build apps and get into web development, then a bootcamp is a great way to dive right into coding and focus your learning. And our students, even without a CS degree, or any degree at all, have still managed find jobs as software developers after the bootcamp.

This is a common misconception. While there are of course, fields that do require a good grasp of advanced maths and physics, such as in high-end video game development, for the most part, building websites and web apps actually require very minimal maths.

For example, for a front-end developer who focuses mainly on the appearance and design of a website or web-app, there is essentially no maths involved. Rather, they focus more on design sense and user experience.

One of the most important things for a coder is in fact learning how to hone their sense of logical thinking in order to solve problems or make their app work the way they want it to.

5. Which language should I learn first?

This is an extremely popular question on the internet. You'll always find articles or videos titled something like, "Best Coding Language to Learn in 2019!"

But it's not really about the language; it's about understanding the core concepts that are prevalent in every coding language, and can therefore be translatable across languages.

Coding is all about adaptability and it is highly unlikely that you will be coding in one language for the rest of your career.

In other words, which language doesn't matter because concepts are transferable. What matters is how you use it to do the things you want to do - e.g. build apps.

Once you know the core concepts of a language, for example, Python, you'll be able to adapt your knowledge and code in other languages such as Java, C, Ruby, php, JavaScript and so on and so forth.

The syntax and the way it's written may be different but you already have the fundamental knowledge and logic to be able to translate what you know and code in a new language.

Never forget that tech is a perpetually-changing field and the popularity of languages will rise and fall.

Your main goal should not be to learn the most popular language, but to develop a strong foundation of coding knowledge in order to be able to adapt to any languages in any of your future jobs.

6. What opportunities for me are there once I've learnt how to code?

Coding is cross-industry, so there are job opportunities available in all industries, not just tech.

The more obvious roles are as a frontend, backend or full-stack developer in a company. NEXT Academy will certainly give you an edge as by the time you've graduated, you will already have the skills necessary for a developer job.

You could even be a tech entrepreneur and build your own startup! Think something like what Mark Zuckerberg did with Facebook. Being able to code your own app is great as you can do it all by yourself without needing to spend the money to hire someone to assist you, at least in the beginning. Later on, when your idea has gained some traction and people start to notice, then you can hire more people to join you and really expand on your creation. Some examples of successful startups in Malaysia include SushiVid and GoGet.

Other students enter more traditional roles, as there are always opportunities for bankers and marketers who have the ability to code, or IT consultants for big companies.

We've even had students who came to NEXT Academy so that they could automate processes for their own family businesses. Others became freelancers and now live the digital nomad life, and some even get into IoT, robotics or are building hardware and software for vertical farming.

Furthermore, after you learn how to code, it's easier for you to get into areas such as data science, machine learning and AI, and a fair number of our students are now in those areas themselves!

As you can see, the opportunities truly are endless, so it's up to you to use your imagination to discover all the areas where you can put your coding knowledge to use!

Curious about code and want to take your first step into the tech world? Check out our Part-Time Frontend Web-Development Bootcamp!