NEXT Academy's alumni Petr shares his experience and advice on picking the best coding bootcamp and also how you can get a high-paying job. 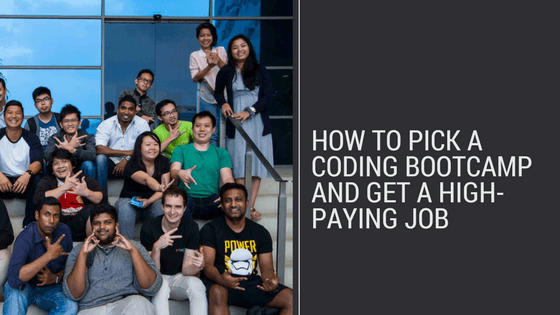 So you are thinking of changing your career path, learning coding and breaking into a new industry? Probably you already see yourself with an attractive high-paying job at the end of your journey, right?

Well the best thing is that it’s more than possible and I know it from my own experience. You can do all the three things above in an incredibly short period of time. If you start now, you could probably get there within a year.

If you want to accomplish it, it’s better if you put yourself into a position as a hacker. Not a coding hacker, but a life hacker: Move fast, think differently, look for shortcuts and make things happen with limited time and resources. Start with questions like:

I went through the journey myself a year ago. I found a shortcut how to learn coding by attending a bootcamp:

"But I was determined, and within 3 months I attended a bootcamp in Malaysia, got a high-paying job within two weeks after graduation, started my own projects and got job offers in three different cities and around 50 interview opportunities by some of the leading tech companies."

There are 5 key lessons to bear in your mind before starting such an exciting journey:

#1 Choose a bootcamp wisely based on your BUDGET

The average price for bootcamps in the US market is $11,451. This is more than most of us could ever afford but on the other hand it’s still way cheaper than going to a college. But stop here, you want to be a coder, right? A problem solver, a hacker… so hack the price.

‍Find something cheaper, more affordable. It does not need to be in your location. Low-cost flights are so cheap nowadays that you could study anywhere.I am a Czech guy who lived in London for the past years. When I heard about bootcamps, I was fascinated and I said myself that it is something I have to do.

The IT industry is growing incredibly fast and I just didn’t want to miss it. I applied for Makers Academy in London, a bootcamp for slightly less than the ones in US, but still very expensive. I got accepted but 8,000 pounds was still more than I could afford - I would have to work for several months while living in poverty to save enough money, plus living in London is not cheap either. In total it would cost me around 12,000 pounds for three months. Not possible.

#2 Think about the LOCATION

"Ok, Google, seriously. Find me a super bootcamp that I could afford. We don’t have time. I need to learn coding as soon as possible and leave my current job.

As soon as I found the search result, my brain started to calculate the cost of the bootcamp and if I could afford it: Bootcamp for 9 weeks: $2,000 (now the price is $2,650)

‍Do you see the difference?I've never been in Malaysia before, but during the process a year ago, NEXT Academy was the only bootcamp that was way cheaper than the others.

Fantastic! I had a Skype interview directly with the CEO and after a couple of days I got an email: “CONGRATULATIONS, YOU’RE ACCEPTED!” The rest, as they say, is history.

#3 Don’t forget for the COMMUNITY

You’re stepping into a new industry where you likely don’t know anyone. Any help will be useful from the study field (highly experienced mentors) to the job search (partners). Connection and community are the next key elements on how to choose the best bootcamp. We don’t need to go far away to claim that the best and most innovative community is in the Silicon Valley, US. But don’t panic if you can’t afford it, you are likely to meet like-minded people sharing the same goals and passion everywhere.

I was lucky attending the coding bootcamp in Malaysia as the founder had a Silicon Valley background but also the community around was inspiring. We had classes in MaGIC - Malaysian Global Innovation & Creativity Centre - a startup environment and accelerator running by government where we could meet startup founders or attending many interesting events. The community in Asia was also really passionate about social entrepreneurship & tech as the internet becomes available anywhere.

#4 And the connections: JOBS & PARTNERS

If you want to find a job on the end of your journey, you’re better to check the bootcamp's partners & connections. If a bootcamp has strong partners, then you’re more likely to secure a job with their help. Some bootcamps have even job guarantee and they will help you through the journey of finding a job. Advice, connections and recommendations is what matters most. Keep in mind that the location is important as well. If you’re outside of United States and you would like to attend a US bootcamp, it could be quite difficult to get a job in US unless you’d have a visa permit or become really good at coding.I moved back from Malaysia to Czech where I secured a job within 2 weeks. I didn’t like it much and I left and I moved back to London.

I had 100% positive response in my country but in London the response rate was about 10% - so shocking. I managed to get some interviews but didn’t secure a job. Twice I felt I could finally get a job for a junior position but eventually the companies decided to hire someone from a local bootcamp (Maker's Academy) that had very strong network and position in London.

After struggling a couple of months in London I asked NEXT Academy if they can help me to get a job in Malaysia. With their help, I applied to some startups & companies in Malaysia but most of them had a problem with the visa process. I eventually moved to Barcelona where the tech scene is developed well and the demand is high too and I managed to get a job offer there. Luckily at the same time I got a response from a big Malaysian company (AirAsia) that was willing to go through the visa process and hire me (based on NEXT's recommendation).

In developed markets like US it would be quite impossible. So what I wanted to say is that my bootcamp opened me opportunities in many cities in different countries and even a new continent but on the other hand it would be pretty tough to find a job in developed hubs like London, US etc due to big competition, not many junior positions and without the connections.

The programming world is pretty difficult to orient in and there are many different opinions on what is the best and how to start. Before attending a bootcamp, you should definitely do some pre-work - most bootcamps already assign some tasks before the first day, but anyway you should definitely check what is the difference between front-end and back-end. You should learn some basic programming codes (if, for, array etc) and do maybe some basic static websites using HTML & CSS.

If you do it, you’ll have some advantages over your classmates and you could progress quicker, as well as be able to focus on more important tasks. All bootcamps will likely have different teaching methods and maybe a different tech stack you’ll work with. I’d say that on today’s market you can mostly choose from two variations:

Javascript is nowadays one of the most popular programming language. It’s quite unique because you can build both frontend and backend using just this language. Big companies like Google, Facebook and many others are building their products primarily in Javascript. The technology is moving very fast and every month there are some news going on.

On the other hand Ruby on Rails is a server-side language (back-end) but you should touch some front-end languages as well like Javascript or jQuery. You will definitely find it easier to learn - Ruby on Rails is really simple and you’ll avoid many syntax errors to get things done.

My bootcamp teaches Ruby on Rails with other languages (SQL, Javascript, jQuery, HTML, CSS etc) but I personally think that we got much more than that. The highest skill I gained during the course was the rapid learning process, focus and most importantly, the problem-solving skill - most of the time we didn’t use presentations and we were taught to resolve problems ourselves. It was difficult at first but once we graduated, most of us could continue without worrying and we could pick up & learn new technologies without any issue. After the bootcamp, I was able to Javascript & React pretty smoothly.

#6 Are you a woman? Take advantage!

The tech world is mostly occupied by men but this fact is going to change in the nearest future. Many companies are working to solve this problem gap and get more women interested in coding and tech generally - the goal is to diverse their teams. Most bootcamps are also supported by companies or by own initiative to change this status and get more women into tech. Some bootcamps offer discounts for women and I‘ve seen also some tuitions. There is no reason women can’t code and everyone will be happy if you will jump into this industry, where men dominate.

As you can see the overall experience of choosing a bootcamp depends on one another. It is up to you what is your priority and value - if you don’t have enough money, simply choose a bootcamp by budget. If you have enough money, then go for the community or job partners. If you are a woman, then you can find something unique where you’ll get a big support.

So don’t wait, get out there and find the most suitable bootcamp for you right now. Want to find out more about the bootcamp Petr attended (and the other courses we have available)?

Feeling inspired by Petr's story? Think you got what it takes to join our coding bootcamp?