What framework or language should I dive into?

This is a very difficult question to answer, and the answer is different for every single person. However, we can give you some advice. Have a look at the blog to find out! 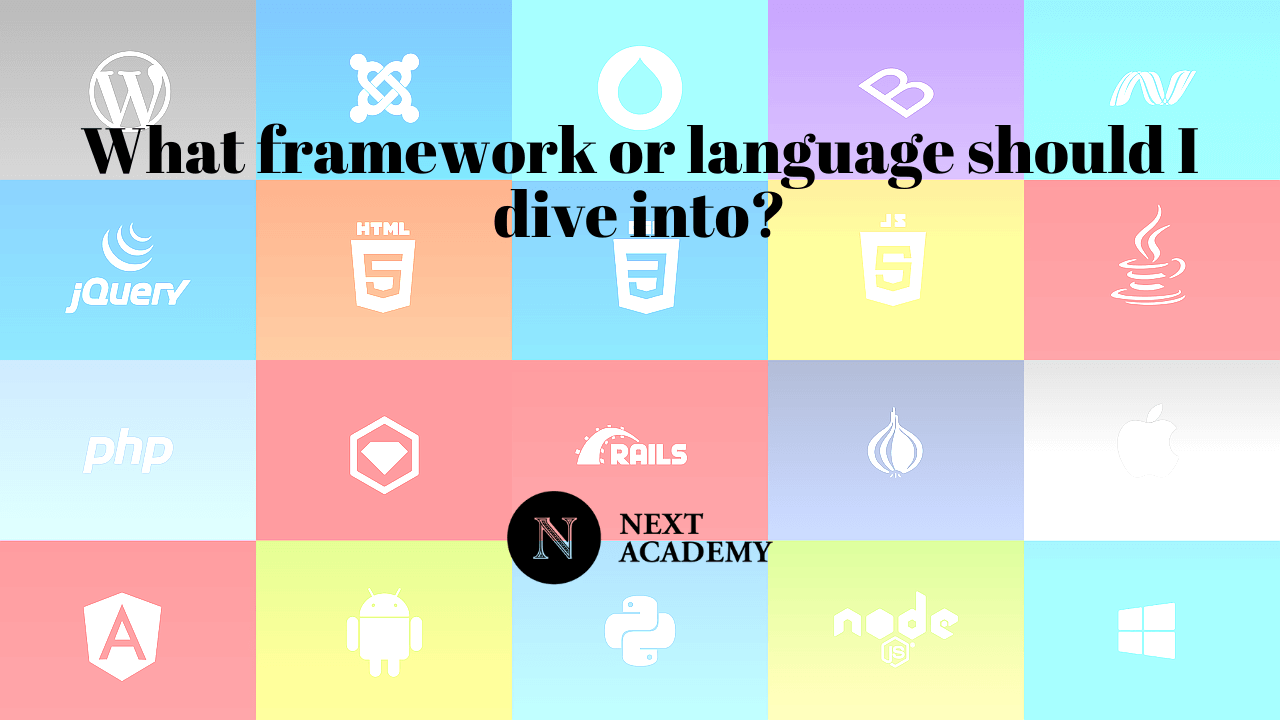 Audrey: Hi guys, and hi Instagram people. What framework or tech should I dive into?

Sandra: So, it's not so much about, like Audrey said, it's not so much about the framework or what technologies to use, it's more about getting your fundamentals down, and you can start with any language, but the most important part of it is that you understand your core concepts. Because then that makes you adaptable. And it means that you'll be able to use what you have learned and transform it. Into something for your next job or what ever other language you're going to be using. So again it's not really about what's the best framework, what's the best language to learn. It's more about the core concepts that you will learn in any language. And how you can use that to adapt to another language later on if you end up moving or changing.

Audrey: So I think one of the biggest risks that I think see in some people where they focus so much, it's actually really interesting to see how people learn coding. So, I've seen some people who want to make sure that their fundamentals are strong, right? I learned how to code first, do it the raw way, then dive into framework because frameworks are to me, to us, is kind of like shortcuts. To make your life easier. Dive into frameworks and then so on, so forth. I've also met people who don't really want to care much about the fundamentals, they just dive straight into the frameworks.

Problem with diving into frameworks

Audrey: The problem with diving into frameworks is that, yes, you tricked it, a step-by-step. Step one I will do this, step two I will do this or there are templates, they have frameworks. I can just follow them, but remember things very fast. First things first, frameworks can lose popularity. Today something might be very popular now, give it another few more years, people will just go like, oh that was so yesterday. And now we have a new thing that's coming up and let's go towards that, and what happens? When that happens and you say, you call yourself, oh I'm this this, x, x amount, x framework developer and then it just falls in popularity, then what? Are you obsolete now, so I think that is one thing you should think about and people fall into that trap. And it's really scary, the fact when I actually go on, when I actually go on the Internet and read up on people, people ask these questions because they wanted to learn to code and there are so many people who give them, I'll call it, I don't want to call it false information, but to me it's not really ethical.

But it's not really good to just tell people, oh you just need to learn this framework and you're set for life, what does that mean, right, if things change, what would happen next? So, if your fundamentals are not strong, you can't even customize the things that you are learning and your framework decided to say, decided for whatever reason lose popularity, you are not going to be able to secure your own, you would not be able to evolve with the tech world, as well. So, I think really one key thing is think about building your fundamentals really strong. So, for us I think at NEXT Academy, one, we also always remind our students, which is why we always start off with HTML, CSS, JavaScript. Everything, we make sure that the students are able to actually do it the raw way, that's the key thing. And then, only introduce the shortcut way, right? If you just jump straight to the shortcut way, you will not be able to do, really you wouldn't be able to do much beyond, the same thing goes with, so you also learn JavaScript first, then only you'd learn ReactJS, then you also learn Python first, then only you'd learn Flask, so Flask is the framework. So, make sure that you actually have the fundamentals before you move onto the framework.

And then, with the framework, as well, you also need to understand the flow, the way it actually works, so when you understand how things work, right, how different concepts work, then in the future it's easy for you to actually go to a new technology, new languages, new framework because, hey, you realize that the concepts are quite similar. So, I think those are very crucial things for you to think about. Do you have anything else?

Sandra: Yeah I noticed online as well, that one of the top questions is what language should I learn? And go through like the year, what's the best language to learn for 2019, what's the best language for 2020? And that is, it's not the wrong question per se, but maybe it's not the ultimate focus that you should have. You should be focusing more on okay, if I pick up this language, what are the important things to learn from it and, how and what are the keys concepts that are translatable to any language? Because you do have the same, you know, you have the same functions for example, and like loops, and so on and so forth that will always be translatable to any other language. It's just maybe you've written in a different way, but as long as you know how to use them, and as long as when you change languages you know how to write them, it's basically the same thing.

Sandra: Yeah, you just got scared, you're like oh there's so many choices, and then you get paralyzed, and oh no I don't know which step, or which direction to take.

Audrey: Yeah, so which is why for us, I think for us, I actually will be very frank with people when people ask me that. It really depends on what you want to do right, but one key thing is that learning to code is not really the language right? It is learning to communicate with the computer, so it's like a kid right? If, you know, there is English, there is BN, and there is Chinese, but we couldn't learn all the individual correctors, if you can not string them together we cannot even communicate, so I think one key thing which is why we always for us using, you know, JavaScript, or Python, it's just a medium right? It's just a medium for us to teach you the key core concepts to communicate with the computer, do the things you want to do, but in the future, you may not be using these languages. Maybe you want to use some I don't know, C#, Java, Elixir, there are so many languages out there, you might want to use those languages, and it's totally okay, but the key thing you realize that oh I already know how to communicate with the computer, the only difference is the language. Yeah so you get to that point, but at the start it's okay to stick with one language, but you need to achieve, you know, to the end of the journey with the one language first before you switch to a different language.