Join us as we debunk some of the coding myths that may be keeping you from joining a coding bootcamp! 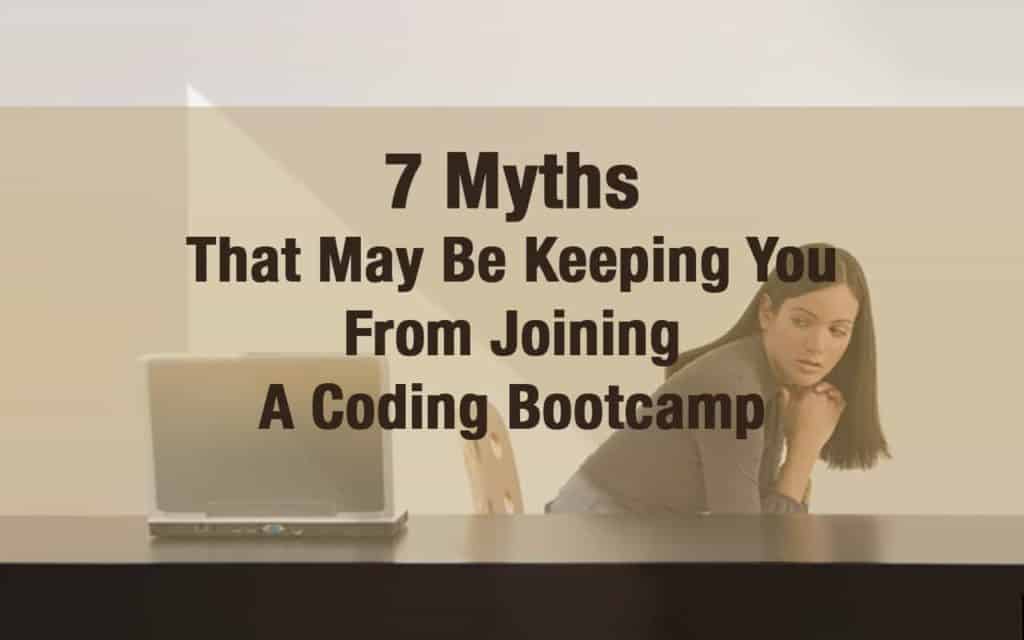 Want to join a coding bootcamp?‍

A coding bootcamp is only one of the many available options out there for those who may be interested in learning to code. It’s an intensive investment, one that requires a person’s time, money and a whole lot of blood, sweat and tears.

Most bootcamps last about 10-12 weeks, are intended to help people gain the skills they need to transition to a technical career, and require a person to quit their day jobs and make a full-time commitment. (Part-time bootcamps do exist, but are often less effective than their full-time counterparts, or simply take longer to complete.)

With all this in mind, it’s obvious that joining a coding bootcamp is essentially a pretty significant decision, and not one that most people make lightly. If you want to learn how to code and have been considering a coding bootcamp, I would recommend taking the time to really do your due diligence before signing up. Research as much as possible about the price, location, syllabus, mentors, and results (experiences from past students) before making your choice.

And above all, be aware of what is myth and what is fact before citing something as a reason why you decided not to sign up.

To help you out with that, here’s a list of 7 coding myths that may be keeping you from joining a coding bootcamp – and we’ll even help debunk them for you!

Debunked: When it comes to learning anything, technical or otherwise, age is not a factor. It’s the same thing when it comes to coding, though there are other factors which you may need to consider, such as:

A person’s age does not determine whether or not they will have the factors above.So you’re never too young or too old, but you do have to think about whether or not you have the skills and attitude necessary to learn how to code.

Myth #2 – I don’t have a coding or technical background.

Debunked: Depending on the level of the coding bootcamp you sign up for, you probably won’t need to have any knowledge of coding beforehand. Most beginner bootcamps are designed with tech newbies in mind, so as long as you’re willing to learn and work hard, there’s no reason why you can’t learn how to code. Many of our own students came from non-coding backgrounds. We’ve seen people from literally all walks of life in our bootcamps, and 95% of them managed to graduate successfully and move on to find success. So remember it’s not about where you come from; rather it’s about whether or not you have the attitude to learn and succeed.

Debunked: Tell that to all the female coders who now work in the industry, many of whom have been coding for years. Some bootcamps are exclusively for female students, but even with bootcamps like ours, we have a pretty decent ratio of female-to-male coders, with about 1 in every 3 students being female. If you need some facts about women coders:

Don’t let gender stereotypes stop you – women can be awesome programmers too!

Debunked: To be very honest, coding is more about logic than math. As a programmer, you’ll be spending most of your time writing code, not math formulas. So no, your knowledge of math will not be directly proportional to your programming skill.

‍All you’ll really need is some basic algebra, logic, problem-solving skills, a never-give-up attitude and patience. For anything more advanced than that, there are libraries and plugins which you’ll be able to use to run calculations for you, which you can implement directly into your code.

Myth #5 – I want to work in the tech industry in the future. This means I need an actual computer science degree from a university, so I can get a better job/salary.

Debunked: There’s a little-known fact about the tech industry: If you want to work as a programmer, software developer, or any similar job, you don’t actually need a degree. Of course, having a degree can definitely help, but research into technical salaries these days has shown that employers tend to offer based on a programmer’s experience, the number of years they have worked, as well as the number of programming languages they know. As for hiring, most employers don’t even look at your degree these days. Instead, what they want to see are things like efficiency and innovation. They don’t want someone who’s going to sit in one place coding all day; what they want is someone who’s always innovating, always exploring new frameworks and thinking up new ways to increase revenue and increase productivity and efficiency at the workplace. That’s what they’ll be paying you for. We’ve even known some students who graduated from our bootcamp and went on to work as software developers in tech startups and other companies. What’s even more amazing is that they’re easily earning more than most fresh graduates are able to get after working for a few years – and without having a degree! (If you’d like to further debunk this myth, find out what our past graduates have to say about their experiences working in the tech industry or in startups.)

Myth #6 – I need to learn the “best” programming language to be a developer.

Debunked: The first question many beginners ask before learning to code is “What is the best programming language?

”There is no “best” programming language – the best programming language would be the one that best suits you and your needs, your situation, and your future goals. Here at NEXT Academy, we teach Ruby-on-Rails, which we’ve found to be useful, relevant, and easy to learn. At the end of the day, if you want to be a great developer, you need to master more than one programming language. It doesn’t really matter which one you start with either – learning one will give you the fundamentals you need to learn others in future. (By the way, we did a blog post on this before. Why not check it out here?)

Myth #7 – I tried coding courses before. It didn’t work for me.

Debunked: There are a lot of reasons why your previous coding course may not have worked out for you.The first thing to understand is that not every coding course is created equal, and certainly none of them are perfect. You may have found that the one you joined didn’t suit your learning style, or maybe the syllabus wasn’t properly put-together. The instructors/teachers may not have been able to teach effectively. If it was an online course, you may have felt overwhelmed by the amount of information and topics available, or the fact that you were studying on your own and had nobody to ask for help or guidance. ‍

Don’t let yourself give up on coding so quickly. Identify the issue which caused you to feel this way, and see if there’s a different solution you can try. At the end of the day, if coding is something you really want to learn, then you should find a coding bootcamp or course that works for you and your learning style.

One thing that isn’t a myth: learning how to code is difficult.

‍The road to becoming a successful programmer or software developer isn’t an easy one. But if coding is something that you seriously want to learn, then you’ll need to suck it up, stop worrying about myths, stop making excuses – and just get out there and do it. Join a bootcamp, sign up for an online course, buy some books – whatever you choose to do, make sure it works for you. The important thing is to take action and get started. Why not today? If you would like to check out the courses we have available, here they are: