Is Jack Ma A Hypocrite?

Who on Earth will hate being a billionaire? Was Jack Ma telling the truth or is he a hypocrite? Here's my take on this. 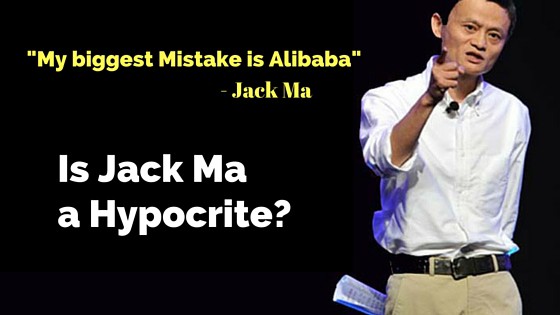 It shocked the world. In fact, it was probably one of the shortest Jack Ma articles I’ve read. It seemed to me that even the media itself have a tough time digesting this new revelation. It was almost a taboo subject without much of a mention.In many communities, Jack Ma was seen as THE example when it comes to entrepreneurship. His name is a household name, his name equates to success, fame and wealth. His name is synonymous with Alibaba. And yet today, he saw Alibaba, the brainchild of his which ironically had made him one of the richest and most successful men on earth, as a mistake.It contradicted everything – Everything we think we know about him.

There is no doubt that Jack Ma has been known for his bold choice of words which sparked a string of controversies. At times, I hear people calling them “publicity stunt”; for me, he’s probably too grown up and too rich to participate in any form of child’s play and superficial diplomacy.

To a lot of people, it was hypocrisy. After all, building a billion dollar company and being at the top of the world has always been a dream; a far-fetched, unachievable yet common dream that many have. In fact, how many will look money, fame and power in the eye and call them all a mistake?Below I will share my point of view on what I think of his “outrageous” claims, but for the convenience of those who have not seen the full story, below is the translation of the article that was originally published on Sina, a Chinese news portal. You may find the original article here. Here’s my translation of the text:

Jack Ma and Alibaba were often seen as the industry legend and role models. However, the man behind the internet empire does not exactly see it in the same light.

At St. Petersburg International Economic Forum, Jack Ma stressed that his biggest mistake in life was building Alibaba. And that building the company has consumed his own personal time and life.

“My biggest mistake was building Alibaba. I never expect that it will change my entire life. I have always wanted to build a small company, and instead it became such an empire.”If he could do it all over again, he “would not dabble into such business anymore”, and his hope is to “travel around the world and have a quiet holiday. No talks about business and no need to work.”

Nevertheless, Jack Ma still spoke about his bigger dream, which is to establish a “global support corridor for enterprise electronics”. Maybe, this is Jack Ma’s true north.

Here is a conversation I had with some people. I asked what they think about Jack Ma’s bold new statement to the world.

“What do you make of Jack Ma’s words?” I asked.

“If he hasn’t reach that height, he wouldn’t have said it,” said the first.

The big question: Is he a hypocrite?

To be honest, saying yes and calling it a publicity stunt is the easy way out. Life resumes as normal.

Saying no, you will have a whole set of dilemma. Why?

So what’s in that billionaire’s mind when he uttered those words?I took some time to speak to some ‘successful’ people and deconstructed their mindset to understand the cost of being (extremely) successful:

1. You are always under the spotlight

Imagine always required to be in the mood of networking regardless if it was a good day or a bad day; you will need to always maintain your composure and smiles in front of the public and gracefully squeeze out a smile when a picture was requested.

You and your business is like a real-time celebrity show.

Previous generations of self-made multi-millionaires or billionaires (mainly from oil and property) have never been tailed by paparazzi as much as Jack Ma or any billionaires we hear about these days.

Today’s self-made multi-millionaires and billionaires (most of them unrealized though) are mainly from the tech industry which requires a great deal of PR to get them noticeable and investable. And by the time you exit (or fall from grace), the whole world would have known your name.

You can’t be too impulsive or emotional especially in front of the media. There’s public perception of you which you need to build and preserve. You will have fans and haters. Your name and face are no longer your own.It’s more than just business, it’s like a show and you are the actor who revolves around everyone’s world.It is only at home where perhaps true peace will be graced upon for these celebrity-entrepreneur.

2. The pressure where thousands of peoples’ livelihoods are dependent on you

For those of you who are entrepreneurs, you would likely know how this feels like. You would feel responsible towards your company and your employees.The fact that even with one employee you are probably feeling the pressure. Imagine you have thousands of employees in the company, it means that thousands of families’ livelihood are on your shoulders. This is no doubt a great pressure.You would start thinking about, “what happens if there’s no salary for them?”, “What happens if the company closes down?”

The virtue of being responsible can become a burden

Jack Ma has responsibilities (I have no idea if it is self-imposed or externally-imposed upon) and he equated “wealth” (富) with “burden” (负). Ironically, it is a pun in Chinese.For him, his responsibilities are greater and more unique:

In the case of a normal IPO, your added-responsibility is your investors. But ever since Alibaba’s IPO, it was more complicated for Jack Ma. The Chinese government and its citizens look to him to ‘give back’ to the society – economic growth and jobs. And to the investors, it’s all about high growth, increasing revenue and profit. Just with a slight falter in numbers, there will be an uproar from the people and investors.These responsibilities became a chain. Maybe that’s why he can never truly retire.When asked about his wealth and fame, to him, great wealth comes great burden and thus the pressure is enormous. Despite announcing retirement on 9 May 2013, Jack Ma never did retire. He is still actively involved behind the scenes.And I wondered if he even has time for himself or his family…

3. Sacrifices are pre-requisite in building empires, and what’s lost is forever lost

As an entrepreneur, it is common to bust your ass day and night. It would mean 16 – 18 hours a day, sleepless nights brainstorming and thinking what is best for the company. Most of the time, it is beyond necessary. It is an obligation.

Starting a company is hard, but sustaining one is even harder.

The bottom line is, 99% of startups will fail. To even stand a slight chance to succeed, giving 200% effort is just a pre-requisite. Working 18 hours a day, 7 days a week means little to no time for myself, friends and family. Most of the time we are too caught up in the moment that we forget the more important ones.It means that for those who are married will miss out the time witness their kids’ growth, miss out countless family dinner, miss out the potential important moment of your family like the first time ever see your son walk.It also means missing out the limited time that I could spend with my parents, knowing that they are growing older day by day.It could also mean missing out in my own social life, missing out on friends’ gatherings and eventually losing them all together because almost no one could understand why and what I do.These sacrifices are irreversible as we can’t buy moments or time back. These are permanent scars many have – be it being an entrepreneur or an employee.For Jack Ma, he has toiled the past 20 years to build Alibaba, and today he is looking back and asking himself “what if…” Regardless of how successful Jack Ma is, he’s still a normal being with emotions. Regardless of how much money he has, he still can’t buy time back or buy the luxury of a peaceful and quiet life in the future.Choose your sacrifices carefully and understand the consequences. It is a choice, not an obligation.

Not everything that look good is good for you, just because IPO was the ultimate exit strategy everyone wanted, it doesn’t mean that it comes with no strings attached. Cherish moments in life because the universal truth is – moments stays, money don’t.And finally, continue to dream on. Jack Ma could be a hypocrite to many, but at least he decided he shouldn’t be one to himself.

Perhaps it was in hindsight that Jack Ma regretted his decision, yet his words contradicted his pitch for Alibaba back in 1999.In the meeting he lay out his plans to his potential partner to compete with the likes of Yahoo and eBay in the US , as well as aiming for IPO by 2002.He did not manage to achieve IPO by 2002 yet it does prove a point – He wish to make Alibaba big since day one!His recent words reflected the change from his ambition back in 1999 where he said :  “I have always wanted to build a small company, and instead it became such an empire.”Check out the video below for his full pitch:

What do you think?