Python 101 - Is Python easy to learn for beginners?

Consensus says coding is difficult to learn, but that should never stop you from learning! 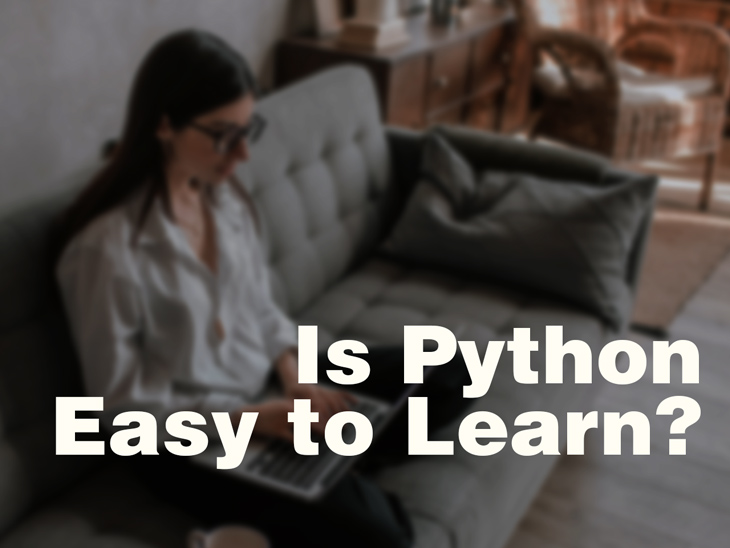 These days everyone is looking at programming to future proof themselves. But is it something which anyone can just pick up? Do you need to be a genius at it?

Here are some key topics we are touching on:

If you want to read about the other aspects of Python.

Is Python easy to learn if I've no IT background?

Python is used not just as the preferred coding language for children, it is such a powerful language that companies such as Google, Netflix and Instagram are using it as well.

Python is often used for beginners as it is considered as one of the easier languages, because of its English-like syntax and clean, organised structure. Like any programming language, in the beginning you’ll be learning the basic concepts and fundamentals, like data types, functions and loops, as well as OOP (Object Oriented Programming). These things may sound foreign and intimidating to newcomers, but they are used so frequently that you get used to them and develop an understanding for them very quickly.

Learning a language is often the easy part. Computational thinking is often a key challenge for most beginners, basically, how do you interpret your thought process into code!

Let's take chess as an example. We know the role of each chess piece, but how you strategize to checkmate your opponent is altogether a different challenge. Which is why, many beginners want to work together with coding mentors to see how they solve problems.

After that, the real practical learning begins when you pick up a Python framework, like Django or Flask. These are used to actually start building real-world servers and web-applications, such as Facebook app, Instagram app, and this is where you’ll start putting your knowledge of the basics to practical use and start building apps and programs you love.‍

Python is a beginner-friendly language and has often been used as the core programming language when it comes to teaching children. So yes, many curriculums use Python so that children can write simple apps and even get into the Internet of Things (IoT).

Often, children programming is to help kids to discover the fun of coding and to build long term interest so that they are inclined to pick up complex programming in the future.

Here's an example of a kid coder:

Programming in general is a great skill for children to pick up, regardless of whether or not they eventually study computer science and become programmers. Learning to code requires a sense of logical-thinking and the ability to problem-solve. Coding can therefore develop a child’s skills in those areas, and teach them to apply those valuable logical-thinking and problem-solving skills into other subjects and in other areas of their lives.

As Python is a relatively easy language to pick up, it’s a great beginner language for kids. For those children who are actually interested in computer science and other areas of programming, on top of web-development, Python is well-renowned for its use and applicability in data science, machine learning and artificial intelligence. Kids who have already learnt Python or other programming languages, will therefore have a greater advantage later on in life should they move down these routes.

Out of our NEXT Academy students, we realized that people who did some form of coding when they were younger, e.g. Neopets, Minecraft, tend to pick up coding easier even if they have not done any IT or computer science related courses.

What can I do with Python as a beginner?

Everyone's big goal is to build cool apps, but before you learn to run, you need to first learn to walk.

Building and creating projects in Python is the best thing a beginner can do to really familiarize themselves with Python. It may seem like a leap, but once you have the basics down, the best way to increase your knowledge and ability in a programming language is to start building something.

As a beginner, you can write simple programs and scripts. Some people would go on YouTube and try to follow along tutorials to build games and simple apps.

Here are some of the things on what people use Python for.

You can build games to improve your logical thinking. Once you are ready for a next level challenge, you can pick up a Python framework like Django or Flask and start building a small web-app. It could be as simple as creating a map directory of your favourite Bubble Tea shops in the region!

There will always be the war of programming languages and languages will go up and down in rankings. One of the biggest fears is, "What happens if I end up learning a dying language?"

Contrary to popular belief, Python is actually quite an old programming language (almost 30 years old). For a while it wasn’t that widely used until about the early 2000s, and it’s been on an upward trend in terms of popularity, especially in the last five years or so.

Programming languages rise and fall depending on need and technological advances. A language or framework that was useful 30 years ago for the technology at the time, may not be entirely suitable in today’s tech scene. New languages are being created all the time, and other languages slowly become less in demand. This is because there is no one size fits all when it comes to tech, and any language has to be useful and practical for the task at hand.

Python is extremely popular at the moment for many reasons, one of which being how English-like it is, making it an easy language to pick up and understand, especially for newcomers. Another reason is its structure and syntax; it is an extremely concise language, and therefore requires less time and effort to perform the same type of function or task as another language might.

Not just that, Python has a vibrant tech community that constantly improve the use-case of Python.

This is not to say that in future another language won’t come to take its place as the most popular or in-demand language in years to come. However, with such a high demand for Python programmers, and Python’s use in areas like machine learning, data science and AI, it’s safe to say that Python is in the safe zone for now.

If you are thinking about picking up Python now, join our Python coding bootcamp.

Can you teach yourself Python?‍

It is possible to teach yourself anything, including a programming language like Python, and if you look on YouTube, you’ll find many tutorials by people who are self-taught in their respective language. As with any form of self-learning, discipline is key and that is the area that many might fall short.

Also, self-learners can sometimes fall into the trap of moving from one language to another, or continue to just learn the concepts rather than progress into the practical side of programming.

The key to becoming a better developer is to build projects in your language of choice as that is where your learning and understanding of the language will increase exponentially.

In fact, Josh Teng, the founder of NEXT Academy was a self taught coder for 2 years. After that, he joined a programming bootcamp in Silicon Valley. He said that his experience with code helped him get started in the coding bootcamp, and the coding bootcamp helped boost his growth to the next level due to mentorship and peer-to-peer learning.‍

There are plenty of Python courses online, from beginners to advanced courses. You can simply check them out and learn.

As for Python classes, it depends what level of impact you are looking for. There are many short 1 or 2 days courses that would lightly introduce you to the world of programming, but if you want to be serious about learning and be able to do something out of it, for example, building an AI powered app, more time and understanding is needed.

Coding bootcamps are helpful in this regard, as their curriculum and structure are tailored to cover both the conceptual and practical side of programming. Bootcamp students in particular get a lot more hands-on experience in building fullstack web-apps, which can be difficult for a self-learner to achieve.

Beyond that, you will be learning closely with mentors, enabling you to build your thinking process while being guided by mentors. This kind of practical experience can often help in ensuring you have more of a solid foundation to enter into the workplace.

Furthermore, having that solid foundation will help you in discerning what is and isn’t useful when you start branching out and learning new programming languages and frameworks. Programmers who already have a solid foundation in one language will definitely find it much easier to pick up a new language or framework much quicker. They won’t have to spend too much time going through the basics of data-types, loops, functions or OOP, as all these things are fundamental across all languages.

Ultimately, whether you choose to self-learn Python or join a coding course or bootcamp is entirely dependent on your learning style and your goals. ‍

For example, if you are from a finance background, you can learn Python for finance purposes. It is a different discipline to allows you to merge finance and coding.

How much does a Python Certification cost?

In the world of programming, certification does not have as much value as your skills. What the employers are hiring for is not a certificate but your skill set which can help them build and grow their company.

Tech interviews have technical coding challenges which would determine if you are hire-able or not.‍

Now that you've learned some good knowledge of programming, why don't you give it a quick try!?

If you want to try out some programming, here you can start learning Python without installing anything. You can use repl.it and start writing your first Python code!

But if you want to download Python for Mac or Python for Windows, you can install via Anaconda and follow the instructions there.‍

Get Started with Python Basics & Exercises‍

Let's get started with some Python 101 basics and some exercises.
‍

How to generate an output with a string:‍

How to generate an output with a variable:

‍How to generate an output with a string and a variable?

‍Now, why not try this:

‍Try it with your own name!

Want to try out more? Do check out more Python 101 basics.

Different companies use Python for different purposes. Learning to code open up those opportunities for you to venture into.

If you are serious about learning programming and you are willing to put in effort so that you can eventually build apps and programs, do check out our 10-week Full Stack Web Development Bootcamp where you can build apps powered by Python.

These days, people of all ages are learning to code, including kids. In fact, Python is often used as the language to teach kids when teachers want to introduce a programming language to them!

Ready to learn Python? Get a head start on your Coding Journey Today!